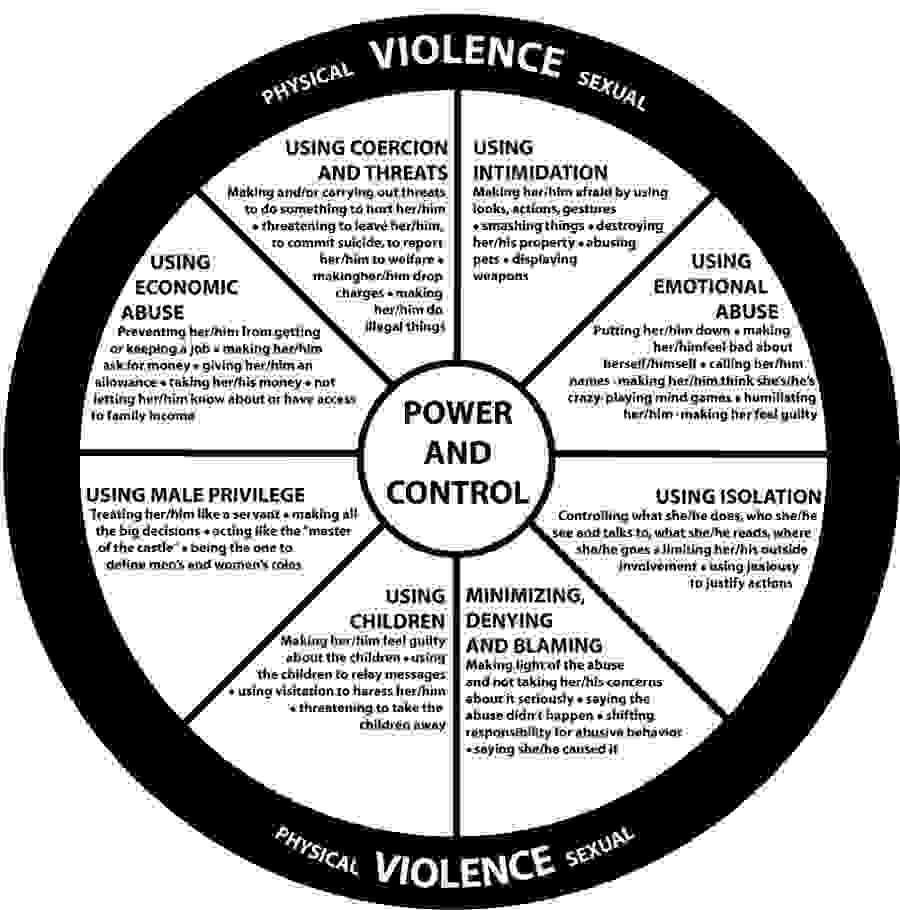 Domestic relationships should provide a loving and supportive environment to give us safe harbour from our everyday lives. Unfortunately, that is not the reality for many of our community members.  Sometimes people don't recognise the abuse they're experiencing in an intimate relationship. If you've been in a long term relationship with someone, it's easy to excuse their behaviour as bad-tempered, over-worked, obsessive-compulsive, or other dismissive terms that aren't always based upon an objective viewpoint. It can be really difficult to see your own life from an outsider's perspective. Even when a person knows they're in an abusive relationship it is extremely difficult to know how to deal with the abuse or safely exit the relationship. People often remain in the domestic relationship because it appears easier than the alternative.

There are many different forms of abuse that can affect families and individuals. Understanding violence in intimate relationships is an ever-changing psychological and sociological landscape as each person faces slightly differing aspects of abuse. The Power and Control Wheel (above) was developed by women in a refuge and support workers from their insights with people experiencing domestic violence in Duluth Minnesota, USA. Their experience showed a continuum of violence and intimidation revolving around the central core of gaining power and control over another person. The spokes of the wheel show the degree of variability of the abuse, intimidation, and violence perpetrated to gain control and retain power. A person may experience any number of these behaviours in an abusive relationship.

Until the year 1891 there were laws supporting a man's right to discipline his spouse with physical punishment. Tasks that were punishable related to such minor things as poor or late food preparation, books or paperwork being misplaced and slippers not being found when wanted.  Sadly, this comparatively recent legislative history has affected some patriarchal views on roles of women in the home. The feminist theory of domestic violence spurned from the 1970's movement and looked at the patriarchal view of the housework which indicated that some men were violently triggered by a woman's domestic failure whereas these same men were not violent in any other areas of their lives. This further led to a concept of "hegemonic masculinity" which believed it wasn't necessarily a patriarchal view of society but that, in modern life, there is a limited range of dominant ways for a male to express himself as a man.  The Australian Bureau of Statistics provide data on the ongoing changes between traditional roles of men and women in the workplace and the home . These developments will continue to alter the social and familial expectations of these gender roles.

We know domestic violence is not limited to gender nor to heterosexual relationships. Men and LGBTQI+ are also affected by abusive relationships. Studies conducted by Michael Johnson in the USA described two distinct patterns in domestic violence: one that is more obvious in patriarchal families where men dominated with considerable power; and another among couples that displayed a more equal power within the relationship where outbursts of conflict became out of control.  They were respectively termed "patriarchal terrorism" and "situational couple violence". Johnson saw the main difference between the two patterns as being the escalation time; patriarchal terrorism grew over years with its regard to severity and frequency. It is patriarchal terrorism that's thought to be more likely to lead to severe injuries and death.

Fixing to a specific "type" of abuse, however, fails to understand the context of domestic violence: the type of violence used, motives of the abuser, or the social and cultural context. Domestic violence is a complex social issue with many varied behaviours. Gone are the days where the community can dismiss a neighbour's shrieks and shouts with the flippant remark, "They're just having a domestic." Domestic violence robs community members of a full and happy life and, in some cases, robs them of life altogether.

Click the button below to make a hasty exit to ABC news page.  The  browser tab up the top refers to Shopping Specials. 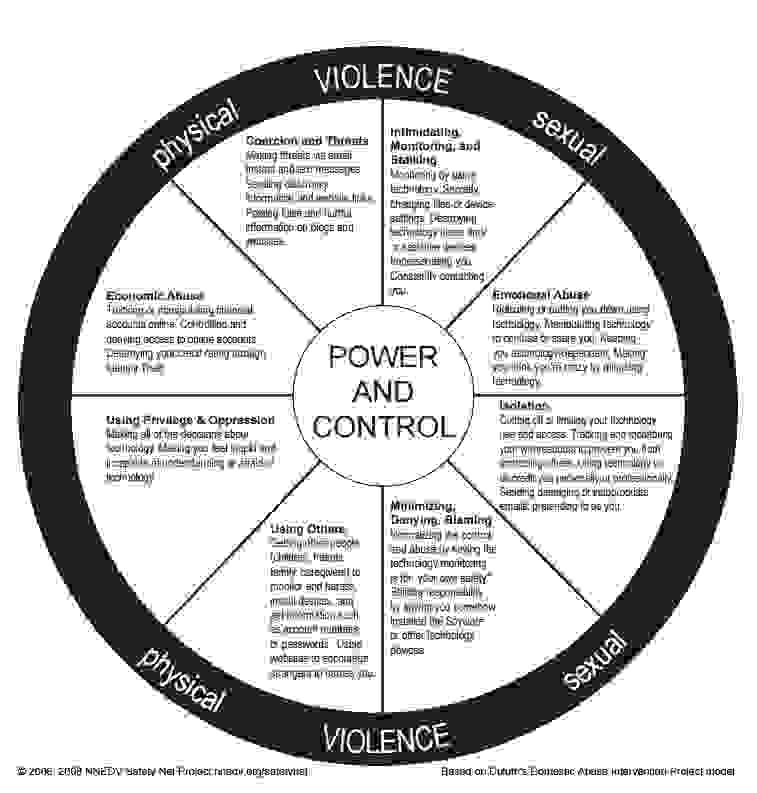 This Power & Control Wheel (immediately above) is modeled upon that created by workers in Duluth Minnesota, USA and modified by University of Michegan's Sexual Assault Prevention & Awareness Center. It was created in a bid to illustrate the dynamics of modern domestic abuse utilising technology.

Technology is commonplace in the day-to-day lives of most Australians. Unfortunately, technology can be misused by abusers to obtain their main objective of power and control. This can often be conducted under the guise of protection of the individual, family or for mutual safety benefit such as using mobile GPS location services or home monitoring cameras. It is not normal for your partner to know where you are, who you're with and what you're doing every minute of every day. Most respectful and trusting relationships do not function using technology this way.

are you in an abusive relationship?

Confide in a trusted and reliable friend. It's worth doing. They can often be a bit more objective than you and provide you with much necessary practical and emotional support. Give them permission to be completely honest with you about what they see and notice. Sometimes you may feel like you don't have an impartial friend especially if you've been part of a couple friendship with others for so long. Start building relationships as an individual. If you think you're able, contacting a counselling service may also be beneficial.

Leaving an abusive relationship is difficult but achievable. Often, you've been kept away from money and haven't been able to control many aspects of your own life. Create an escape plan. Use your confidant to keep up your spirits up and stay on track with your plan; it's so easy to lose momentum when the exit appears so distant.  You can do it and you know it's worth doing.

You know how charming your partner can be; that's how the domestic abuse remains hidden for so long. Once you're out of the relationship, don't go back. It is very unlikely anything has actually changed. There's nothing more despairing than finding yourself back in your abuser's home again after you managed to escape previously! You will regret it and things usually don't get better second time around. Stick to your escape plan and use your friend network to support you when you have moments of weakness. Remember to give them permission to advise you and let them know anything your ex-partner is saying to you.  Know your professional support system.

is a friend in an abusive relationship?

If a friend tells you they're in an abusive relationship - believe them. Don't dismiss their claim because it doesn't match what you've seen of their relationship. Social media is not reality! Ask what's happening and how they are feeling about it. Tell them you'll support them and encourage them to make an escape plan.  Know their escape plan intimately. Do not speak of what your friend has told you to anyone; you can never know the links between the abuser and your friend's network. Remember this network can frequently involve your own partner, if you have one, so be very, very careful. Your friend has trusted you with their safety - don't jeopardise it.

You suspect abuse but they're not talking

It's such a sensitive topic and there's always the chance you're wrong. Use an innocuous opening line such as, "Is everything going ok at home, I couldn't help noticing that..." If you're met with a denial, then accept it graciously but reply with an open offer like, "Sorry, I must've completely misread that. Just thought I'd check and I hope you'd always check with me too if you think you see anything odd. Know that I'd always be there if you need me and I hope you'd do the same for me."  Don't argue with them. You never know what your offer of help could mean to a person: it could start a person thinking about their relationship and whether there is an opportunity to exit.

Be the strongest support

You have to be supportive at the same time as giving some home truths. That's a recipe for disaster in most cases so set up some ground rules up front. If you've been approached by a friend to help, ask for their permission to be brutally honest but reassure them you love them and you're doing it to help. Always remind yourself that they're going through a harrowing experience you don't always understand (you can never know exactly what things are like). If you are also friends with their partner to some extent, never change your behaviour towards them: this could be very dangerous as it may raise the partner's suspicions. Know your friend's escape plan but never talk of it at their home. Meet regularly in an open public place knowing you may have to buy their lunch or coffee in order to allow them to speak freely. Sometimes it may be worth speaking with a doctor, psychologist or counsellor to manage supporting someone else's crisis as well as living your own day-to-day life.